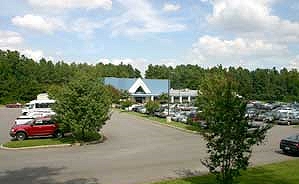 In a world of turmoil, there are still some spiritual leaders who are holding up the bloodstained banner. The Abundant Life Church of Christ has a rich history of upward
progression and growth.

1950’s Our church history begins with a merging of two small churches – The Church of the Lord Jesus Christ, Pastor George Helms and The Church of God and True Holiness, under the leadership of Elder Jones, Bishop J.P. Hill and Elder Baldwin.

1956 Pastor Helms became pastor of this blended church and adopted the name “The Church of God and True Holiness” located at Lombardy and Blair Streets. He served this church well before moving to New York.

1956 to 1958The church operated from several locations until moving into its building on Harrison Street. Evangelist E. F. Perry served as pastor.

Late in 1958 Elder John Robinson of Buffalo, New York became pastor. A church building was purchased at 900 Catherine Street in the Carver area of Richmond. Elder Robinson served faithfully until he was no longer physically able.

1964 The Lord gave our church new life and new direction with the ordination of Pastor Steve I. Foreman as our leader.

1965 Pastor Foreman sold the Catherine Street building and purchased the “Old Sidney School” building at 1700 W. Blair Street in Richmond’s West End which was remodeled to allow for a sanctuary and classrooms. We changed our name from the Church of God and True Holiness to its current name, the Abundant Life Church of Christ. We also implemented Praise and Worship and our church grew with standing room only.

1980 We constructed a beautiful sanctuary adjacent to the building on Blair  Street.

1984 Lady Olivia Foreman founded the Abundant Life Christian Academy that provided a quality Christian education to the metro area children. Under Pastor Foreman’s leadership, we grew from about 75 faithful few to over 350 believers, thus it was time again to look for expansion for our many Late 1980’s to ministries that had developed.

Early 1990’s 78 acres of land in Eastern Henrico was purchased to build upon and the Blair Street facility was sold. This was a period of great transition for us with the following interim locations: Howard Johnson Hotel on Robinhood Road, the shopping center on Laburnum Avenue across from the former State Fairgrounds and a renovated warehouse on Goodell Road, a half a block from our Neale building site.

2000 We began our building program to erect our 3,000 seat sanctuary as well as other facilities for our seniors and single mothers, etc.

October 2005 We purchased the Broaddus Memorial Baptist Church property at 3700 Goodell Road. We utilized both the Neale and Laburnum Campuses.

Currently Dr. Foreman, the visionary, has announced plans to build our new dome-shaped sanctuary onto the Laburnum campus to be more visible in the community and draw in more souls. We trust God to bring it to past!